Home of the Zerans and the Godly Stage, Alstalsia is a primal landmass to the northeast.
Post Reply
10 posts • Page 1 of 1

A few individuals from Alstalsia-- seven, to be exact, Zerans, each one of them-- have fallen prey to a disease of some sorts over the last few days. Over the days, their body begins to deteriorate; a substance, a virus of some kind, seems to be killing them from the inside-out, or so is the conclusion medics have come to. No amount of potions have cured it thus far, although they have slightly delayed it, and Mercana has not yet been tried. Some Zerans, however, being the proud race they are, refuse the use of it; alas, citizens fear that the virus may spread to them too, and it's not long before the opposing Zerans will eventually accept its use.

That aside, though, a disease isn't something new to the world. The most mysterious part, however, comes at the end: the victims begin to have extreme nightmares, or so they claim, and by this time, they begin to go through phases of severe anemia that constantly worsens over the days, though this is the one thing that doctors have been able to cure. Regardless, they either suffer from harsh heart or panic attacks from the nightmares that haunt them at night and die or suicide, or manage to continue on--and reach such a level of insanity that they attempt to kill their relatives at night, convinced that said relatives are out to kill them. So far, none have been successful in doing so bar for a single one who was found in his house, having suicided after killing his wife and child.

(Applications to join the event chain are still open. Otherwise, everyone else is able to partake as a good/neutral character without applying or anything of the sort.)
Top

Three more Zerans have died. A fourth one who had reached the final phases of the disease went insane at 2AM and attempted to kill his wife and child, but his wife had managed to put him down without killing him, as she was luckily a trained mage. However, the child suffered from severe trauma, and the most mysterious part is that after being put down, the man seemed to have come to his senses, although the disease still continued to kill him from the inside-out. It was determined that he'd last only a few more days, but during the next night, he committed suicide after a second -- this time successful -- attempt at killing his child. The woman was fast asleep. However, upon waking up, she immediately took the two bodies and left Alstalsia, enraged by what had happened. More people followed her example soon after.

Citizens are revolted by what's going on. They're scared. Many people are going sleepless now.

That makes quite a few victims. How long will this madness go on?

(Applications for bad roles are still open. Just DM ℑ𝔯𝔢𝔫𝔢#6890. Anyone can be a good or neutral person without needing to apply.)
Top

Once more: the disease continues.

People are revolted. Most Zeran citizens have given their pride up if they haven't already left, and call for outside help. Even with the investigating parties, it seems their performance was not enough, for there have been a total of thirty-two victims since the start of the disease.

"This is kinda boring. I've only moved three pawns and one bishop but the white side won't move a finger," says a person sitting at the end of a table, playing chess seemingly by themselves. "What's wrong with you?! My king is getting so bored and my queen can't move because that hypocrite white queen keeps bullying her. . ."

[Applying is still open. GOOD OR NEUTRAL ROLES DO NOT NEED TO APPLY. ONLY THOSE WHO WISH TO BE PART OF THE MAIN BADDIE ROLES DO. People who wish to investigate should DM ℑ𝔯𝔢𝔫𝔢#6890 on how exactly you investigated.]
Top

A violet-haired witch in eccentric clothing and shadowed features - who has suspiciously kept her identity to herself whenever asked - has been seen making the rounds in Alstalsia on her own as the situation there worsens, meeting with victims suffering various stages of the disease now that their desperation is at a high. Her assumption from the rumors about the strange sickness turned out to be true, after various rituals to try and discern its nature; what's actually killing the Zerans from the inside out is a hex-created poison, one intentionally designed to make sure their demise is slow and drawn out. Though it's impossible to tell if the nightmares and murderous insanity near the very end of it are also the work of this dark magic or something else entirely, measures can at least start being made to save lives now that word is beginning to spread among the community.

Still, it's certainly no ordinary curse, and the sorceress was quick to warn of the possibility of whoever (or whatever) is responsible changing their methods. Though she left the spotlight as quickly as she arrived, leaving the actual recovery to others after delivering the news, she promised that she would be keeping a very close eye on things as they develop...


In the meantime, a person continues to play chess by themselves. . .

Alstalsia calls for Mercalans. The only people who can effectively cure the disease are either two hexers or one faithful Mercalan for each victim of the disease, but. . . it's unlikely that people will trust Hexers much.

That, and none of them can cure the latter, most brutal part of the disease; the insanity.
More Zerans continue to fall.
Top

Even with the news from the witch, the disease continues to spread, albeit at a slower pace.

Certainly, people continue to die, and it's no use trying to completely cure the disease. As mentioned before, you either need two or more Hexers, or a faithful Mercalan to do so.

However, doctors can still slightly delay the poison from doing its work, as already proven by past attempts to cure it.

With that said, people still seem to be killing each-other. In that manner, there's nothing one can do unless they're a therapist and even then, a therapist could only very, very slightly delay the victim from eventually sinking into insanity.


Likely out-of-subject, but adventurers also claim that there are slightly less black doors around Alstalsia than usual, and that most of the ones they find are rated too low of a level for them to care. This, however, only seems to happen to the ones who favor adventuring at night, rather than during the day.
Top

Only a few days ago, a Mercalan man and his therapist wife arrived in Alstalsia, both here to help cure the disease.

And so they did. Slowly but surely, they made sure there would not be a 39th and 40th victim.

Too bad they didn't suspect that they, themselves, would be the next victims. Found in their rented house, the husband was stabbed through the body by twenty needles of light. The needles were powerful, and pierced so greatly that he had fallen nearly instantly.
Powerful, offensive Mercalan magic was used.
Shortly after, his wife was murdered through the use of a knife, and next to her corpse was a Zeran female who had suicided afterwards, being the culprit behind the woman's death.

After further investigation, the mysterious Zeran woman was proven to be the man's secret lover, and was sometimes secretly visiting him at night. She believed that his wife may have murdered him, and acted on a whim. Additionally, it's quite clear that the male's death wasn't suicide, as there was no sign of the man's leftover focus in the air.

The worst of it all, though. . . a cryptic letter was left, written in the most commonly-spoken language. The handwriting is pretty poor, and so is the grammar, just like mine in the morning. 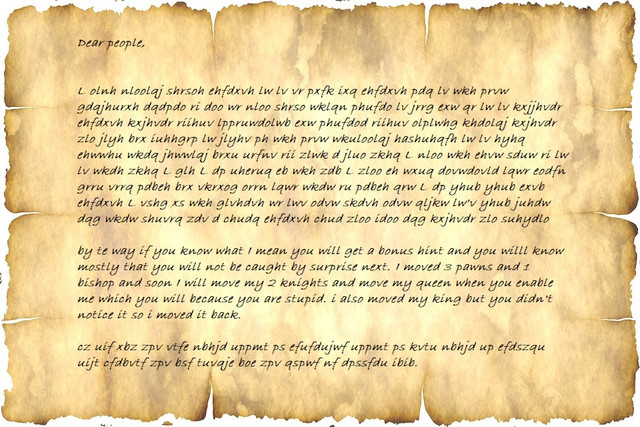 [This is the last post for a while now until others ICly react with something worth posting. Still, for a big incoming event, you're free to sign up to be a bad generic NPC character. Just DM ℑ𝔯𝔢𝔫𝔢#6890 for more details.]
Top

Event is on the 23rd of June in Alstalsia, starting at about 6PM UK time.

If you'd like a hint as to what the event will be, you can try to decode the letter up above.
Top

A moment of silence.

The loud sound of the black side's King being cornered, followed by a heavy sigh. A reply is made in regards to this and the manor is now locked tight, the King no longer cornered.

"Well, I suppose it's time to move more pieces. See how far my reasoning has taken me just by your mere presence at my manor?"


It is now common knowledge that soon, somehow, Alstalsia will be 'turned into a Black Door' by the one behind the Zeran-killing disease, or so they claim. Miss Delphia, otherwise known as Joker, is gathering people to help fight against whatever will happen.

"You can't do that after such a debut!"

Alstalsia has successfully been defended from the attack. Hundreds of undead and cultists attacked, but people like Delphia, Iggy, Not-John, Styx, Gwen, Asu and many, many others have valiantly fought back.

However. . . the one behind this, later on revealed to be a black-haired woman called Deus, has made an announcement shortly before the summoning of a powerful corrupted Youkai whom required many different squads before it finally fell, 'Nahaliel'. Deus claimed to be a God--or more-so, the God who kills other Gods, and in exchange to being told that the Gods are dead--she merely replied by saying, "The Gods live through their people."

She has also left the offer of joining in exchange for immortality, should one wish it, though one will first have to somehow contact her in order to do so.

To top it off, at the beginning of the attack, a certain, sneaky terrorist group -- fifty people happened to go past it twice without a care in the world, heading straight for the level 70 B.D.P. which was also the reason the adventurers whom came to Alstalsia in order to defend it failed to actually do the latter from the get-go -- had blown up Mage's Guild and many other important areas of Alstalsia, though reparations are going well and Mage's Guild's portal is once more usable.

Additionally, Deus does not seem to have lost much from this attack, for most of the cultists whom she had used have simply misted, as they proved to be vampires. The Alstalain side, however, has lost hundreds of people in the attack, both guards and citizens. It is a tragedy, though it may not have seemed as such during the time everyone was rejoicing in their victory.

And so, First Blood has reached its end.

Who knows when the God-Killer, Deus, will strike again?

Maybe when another forty-one people fall to a disease.
Top