A place to discuss the game in a general fashion that doesn't fit the rest of the forums.
Post Reply
73 posts

So hey, I brought this thing back. You all know what that means (dear God no, Ryu shut up), that Miller will have an outlet for his satire again. But in all seriousness, go ahead and feel free to do your comic thing ya'll.

Although, this is not a place to be doing anything as a direct jab at others or pull offensive stuff that would cause a flame war. This is merely for fun and entertainment.

So, I'll be starting off with my old ones (minus Miller's rebuttal to my first comic in between the first two), and a new one I just finished.

Disclaimer: These comics were made for the sole purpose of entertainment, are in no way meant to be offensive to anyone, and are purely pieces of non-profit satirical parody.

The Death of a Meme Aftermath of the Slab Battle: A new Meme rises In this issue of Sigrogana Daily, we tackle things such as: Pink's Pub's monopoly, whether or not Jammer Hats are becoming the next big trend, and can Risu's own anger sustain her enough for her to be over 200 years old?

We also find out that Risu's hair turns into fists when he's really angry.

This isn't a Comic, but I felt like posting this somewhere on the forums: I like that Ryu's comics are all ridiculously self-glamourizing, bordering on the parodic.

e: No really, they're funny.
Top

aranamor » Mon Dec 22, 2014 6:30 pm wrote:I like that Ryu's comics are all ridiculously self-glamourizing, bordering on the parodic.

e: No really, they're funny.

You're missing the point of the first two (at least I'd really hope so), and nobody can probably get the second without Miller's comic in between them. They were about killing a Meme (too much slab) and then a new one starting up (hence the titles). The third was purposely glamorizing and the obvious quote stealing (because of how inspirational I thought it was) with the punchline provided by Psych.

But really, this thread is just here to be for fun and humor. Mine are more so, OOC parodies than IC stuff (not saying anything I make later can't be).

Now get back to the comics! 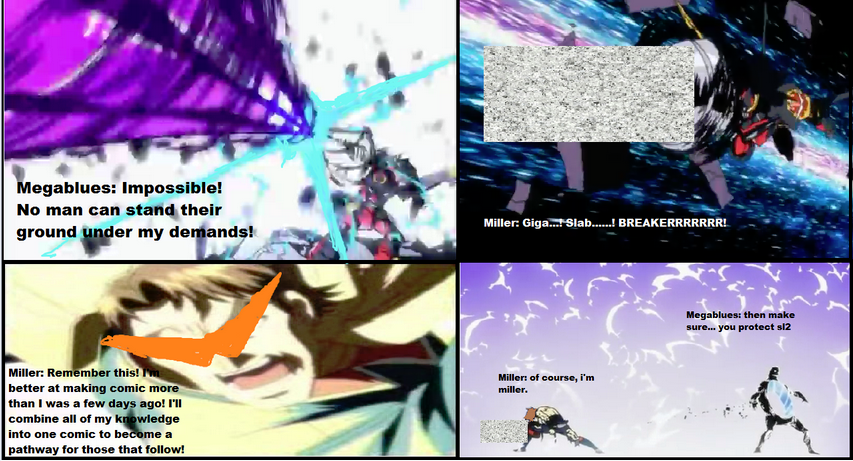 My rebuttal is this.


We evolve, beyond the person we were a moment before! Little by little, we eat a bit more with each scoop! That's how a SPOON works!﻿